Arriving in Amsterdam the other morning (after a three-legged overnight flight) we were surprised and impressed to see a big   oops “6D” film/simulator/ride set up at Schipol Airport.  Colorful, shiny, with room for a dozen or so patrons to be strapped into bright yellow seats with red 3D glasses.  There’s a 3D screen (two Panasonic beamers with polarizing filters–top and bottom not side-by-side if you are interested). The “6D” refers to seats that move and other bells & whistles to augment and simulate the visual experience on the screen with tactile stimuli.

For €5 one can choose between a couple of titles (“Canyon Coaster” is what the gentleman recommended to us). Unfortunately after a transatlantic redeye flight the only title I was interested in was “Shower and Coffee” which they didn’t have so we declined.

We promised to stop by on our way out of town.  They have a high traffic spot by the front door but not with so much light as to make it unwatchable. There weren’t any customers when we were there–it’s awkward catching people on their way out or conversely on their way in before checkin, but it’s an interesting experiment.

Part of me worries that these are the products that give 3D a bad name, reinforcing that it’s a tool reserved for trying to make people barf.  But the other part of me says “the more the merrier.” 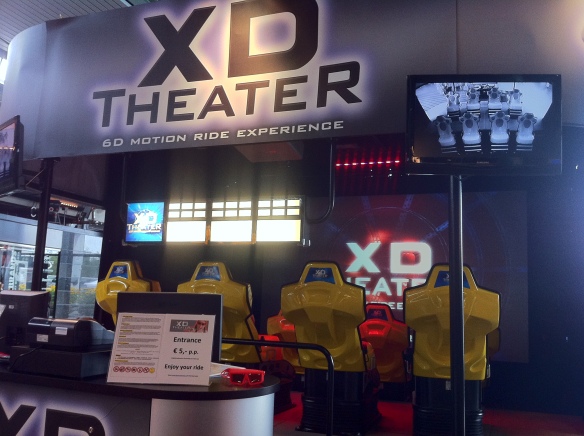